HAMILTON: From the Public to the Rodgers 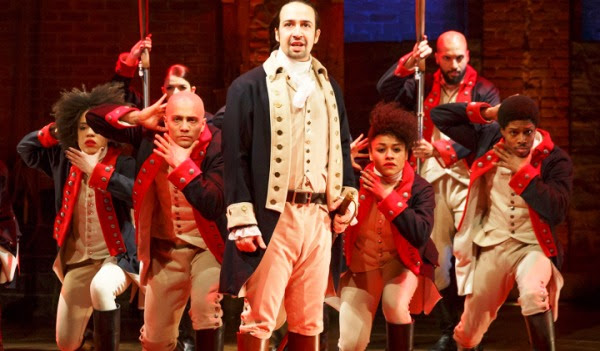 When I was lucky enough to win the TodayTix lottery to Hamilton at the Public Theatre last February, I had no idea what I was about to experience. In my entire theatre-going life, I've never experienced such a phenomenon. It seemed like every week there were more and more celebrities in attendance and the show just kept extending its run. When the producers announced that they were moving uptown to The Richard Rodgers, I had mixed feelings. This was such a perfect theatrical experience in the intimate Public Theatre, that I feared it would lose its energy in the bigger space. But regardless, I was so happy that I could say, "I saw Hamilton before you even knew what it was." I scoffed when it became part of the mainstream media and normal conversation, asking myself, "is it really that great?" I purchased the cast recording in September and after one listen, I had my answer. "Yes it is".

As an English teacher and a writer myself, I am enamored with Lin's use of language. It is incredibly complex and layered, yet simplistic enough to move the story forward. When I first saw the show downtown I was focusing so hard on the lyrics and got the gist of it, but when I began to listen to the cast recording on repeat, I understood the intricacies of his verbiage. Each time I revisit a song, I pick up on a new phrase that speaks to me. My personal favorite, from the song Burn, is "you have married an Icarus, he has flown too close to the sun". Lin's references to history, mythology, and other works of literature are inspired. My head spins when I consider the amount of time, research, and energy that he poured into this piece. But enough about my obsession with the cast recording....let's fast forward to this past Saturday morning when I checked my email to find that I'd won the lottery yet again. I was skeptical. Would it ruin the perfect experience that I'd had last year at the Public? As I sat front row center at the Richard Rodgers and listened to the opening drumbeats, my question was answered with a resounding NO!

I know every single word of every song, so not having to concentrate on the lyrics and plot freed me to look at the bigger picture. I saw aspects of the staging, particularly the choreography, that I completely missed the first time. Andy Blankenbuehler's use of postmodern movement seamlessly conveyed the production's overall goal of telling a historical story through a modern lens. I am a dancer myself, and I love that there were so few moments where I could name the movements. Sure, there was an arabesque here and a penche there, but most of the movement was completely unique. While this is largely the same production I saw downtown, the layers were so much more apparent to me. The minimalist set, a tavern setting with a turntable, allows the the text and acting to shine through. Thomas Kail's staging accentuates the material without distracting from it. This show is so special and unlike anything we have ever seen on Broadway.

Daveed Diggs (Lafayette/Jefferson) my second favorite actor in the show was not performing last Saturday and I greatly missed his rapid fire pace as Lafayette the tongue-in-cheek quality with which he imbues his Jefferson. His understudy was fine, but he didn't have Diggs' twinkle in his eye. My number one guy, however, is Leslie Odom Jr. and his performance grabbed me so much more than it did downtown. Don't get me wrong, I loved him downtown, but he has certainly grown into the role. I have seen many a show in my day and I have never seen so much passion in one performance. He had a fire in his eyes that you would normally expect from an opening night performance, not a random Saturday in February. I saw his Aaron Burr more as a narrator this time. Though it is Hamilton's story, Burr is telling it. The songs that reprise the opening theme are a perfect example of this. "How does a bastard, orphan, son of a whore," "Watch this obnoxious, arrogant, loud-mouthed bother, be seated at the right hand of the father" "How does a rag-tag volunteer army in need of a shower, somehow defeat a global superpower" and "How does Hamilton the short-tempered protean creator of the Coast Guard," etc. Clearly, The Room Where it Happens is a straight up showstopper and a huge highlight, but when he sings "now I'm the villain in your history" he truly had my sympathy. Yes, he killed Hamilton, but when you consider everything Hamilton achieved before Burr even became a senator, you can understand why he felt so much resentment. If someone was constantly steps ahead of you for your entire career, how would you handle it?

What strikes me is that it is so commercially successful, but before it was popular it was extremely well written and artistic. It is rare that these combine in a musical. It is more common that you have saccharine shows like Mamma Mia that runs for a decade juxtaposed with beautifully cerebral shows like Sunday in the Park with George that absolutely flop. Hamilton has shown the next generation of composers that you can write something intelligent with artistic merit and still sell tickets. I only hope that this is a gateway to a new generation of musical.
Posted by BackStage Barbie at 7:07 PM